Art in Vancouver on a student budget

Most students have a limited budget especially at the end of the school year. Though it may feel like there is no way to leave home without spending you last dime there are still a few great ways to get out of the house and get cultured for free (or close to it).

Every Tuesday evening from 5-9 p.m. is pay what you can at the Vancouver Art Gallery, so everyone can afford to go. I have see people pay triple the regular fee or just waltz in after paying mere pennies. It is up to you. Needless to say, these evenings are usually very busy but still a lot of fun.

To avoid the crowds without breaking the bank I opted for a student membership, which is just $45. It gives me unlimited access to the gallery for a year, invitations to show openings and two free tickets to bring friends with you. I like to go back to shows more than once and the gallery often has quiet places to sit and chat or just reflect. Current exhibitions include WE: Vancouver, Ken Lum, and Unreal. 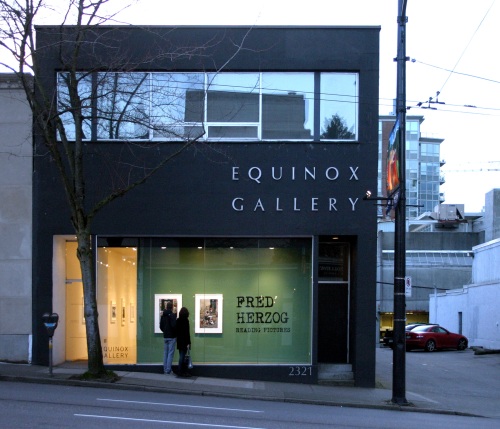 South Granville Street is loaded with galleries that range from cozy and quaint to so snooty you have to be buzzed in. Either way they are a great adventure. The art sold in these galleries goes for more money than I can imagine. But it’s fun to look and there is no temptation to buy like there might be at the nearby Granville Island.

Equinox Gallery is one of my favourite stops along South Granville. The artists shown here are usually quite prolific. A collection of works by abstract painter Jack Shadbolt will be showing at the Equinox Gallery from March 11 to April 9. 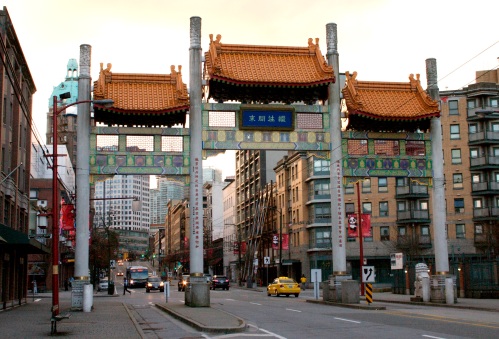 Sure, Vancouverites love to walk the seawall, but why not do a self-guided tour of the art that peppers the shoreline as you walk. The City of Vancouver has put together a printable map of public art in the city including architectural, historic, and cultural landmarks. What a great excuse to get out and explore!

One of Myfanwy MacLeod’s birds; public art at the Olympic Village.

Sweater Lodge is art and architecture; it creates a warm spatial experience.

In 2006 Sweater Lodge represented Canada at the Venice Biennale of Architecture. It has now been restaged in an exhibit at the Museum of Vancouver. Sweater Lodge was designed by Pechet and Robb art and architecture, a Vancouver based interdisciplinary design studio.

Spotlights and glowing 2 litre pop bottles sparsely illuminate the suspended tent like structure. At 18 times the human scale the interior space of the sweater is disarming. The spatial experience makes you feel so small but safe at same time. It is a warm amniotic environment.

The enormous sweater is made of polar fleece from over 3,000 recycled  2 litre plastic pop bottles and is nearly 27m from cuff to cuff.  The Sweater Lodge is a commentary on Vancouver’s identity in relationship to consumption, and our desire to engage with and preserve the great outdoors. 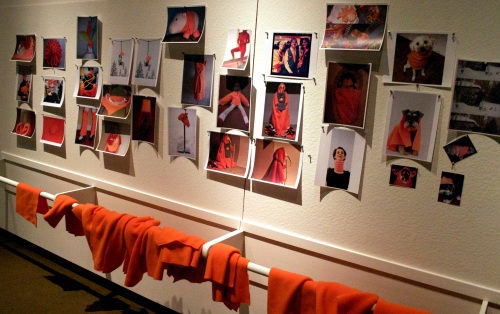 Photos on exhibit from the Flikr gallery and swatches of polar fleece to take home.

After wandering through the Sweater Lodge people are encouraged to take swatches of the bright orange polar fleece fabric home with them, make something special and upload pictures of their creations to a public gallery on Flickr. MOV staff prints the photos and add them to the exhibit. I found this wall of creative contributions to be one of the most charming parts of Sweater Lodge and was inspired to contribute.

My contribution to the gallery: "I am not a parsnip."

Like the majority of people in living in Vancouver, I was not born and raised here. My own contribution to the Flikr gallery reflects the adoption of identity that happens when one becomes a part of a new community.

Sweater Lodge will be at the Museum of Vancouver until May 1. Here are three cozy events all about Sweater Lodge.

March 3: The Creative Back Story

Come to the MOV and hear Sweater Lodge designers talk about the creative process of this enormous sweater from the conception of the idea to the Venice Biennale.

Pechet and Robb art and architecture, the Vancouver interdisciplinary design studio that produced Sweater Lodge, will come to Langara College and talk about their recent projects. This is a rare opportunity to see Bill Pechet and Stephanie Robb lecture together.

Come to the MOV and enjoy an evening of music with Veda Hille in a cozy and unique performance space.

The faces of Langara and the photographer who brought them together: Thorsten Gohl

A collage of Langara College students, staff and faculty.

Professional photo-imaging student, Thorsten Gohl,  took over 1,700 pictures of staff, faculty and students during the Welcome to Langara days in September.  The project was comissioned by the school’s financial aid department to bolster school spirit and embrace the new face of Langara College.

“People got really creative,” said Gohl, who took pictures of the voluntary models who used orange boas, orange hats and inflatable orange guitars to express themselves in front of the camera.

Gohl has now compiled 333 of these photos into a collage. A large poster of the assembled images will hang outside the financial aid offices until Mar. 9.

Gohl is in his final semester of the professional photo-imaging program, but his path to Langara College and a career in photography has not been direct.

A pre-opening shot of What a Drag; a fall 2010 performance by Langara's Studio 58.

Born in Germany, Gohl spent his first six years in Nigeria before moving back. He lived in Belgium after high school and got his master’s degree in computer science.

Gohl didn’t buy his first camera until 2007. After he quit his job as an IT manager in Brussels, he traveled across India, the U.S. and Canada to find himself. During his travels Gohl started to take pictures. 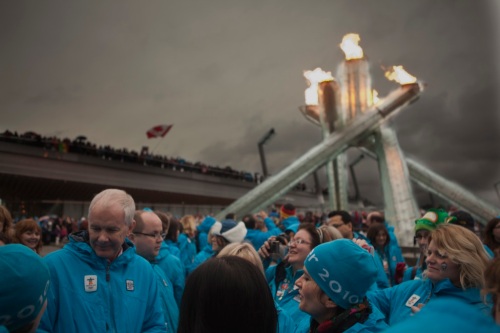 The one year anniversary of the 2010 Winter Olympic Games.

Now, at 32, Gohl says he still hasn’t found himself completely but he has found his calling. “I want to change the world,” said Gohl. “I want to make the world a better place, and photography can do that.” Gohl compared photography to music and food, “You don’t need anything else to connect with people… everyone understands it.”

Gohl often thinks of his childhood dream: to live in every single country for a year. He now realizes this is not possible, but Gohl still wants to travel as much as he can, take photographs, and use Vancouver as a home base. Living this type of lifstyle would be natural for him. Gohl can speak four languages fluently and can get by with a handful of others. However, he thinks photography is the most important of his languages because it connects people without the need for words.

Whitecaps play a home game against Puerto Rico in Oct. 2010.

Even though he is still a student, Gohl finds the time to work with various individuals and organizations to build his portfolio and his professional network. Here are just a few highlights from Gohl’s resume:

All this, and Gohl shows no signs of slowing down anytime soon. In the future he hopes to work more with film.

All images By THORSTEN GOHL published here with his permission.

It is great to go to galleries to see familiar works of art, but the works in the new exhibit at the Vancouver Art Gallery are literally in your own backyard.

WE: Vancouver opened on Friday night and shows the work of over 40 new or recently exhibited projects by Vancouverites for Vancouverites.

From the seemingly banal components of Vancouver — like Kingsway or the Vancouver Special — to architecture, activism, and archiving; the exhibit asks us to stop looking outwards at Vancouver’s magnificent views and focus on what is in the city around us.

It is designed around Twelve Manifestos named for verbs. These action words suggest different ways of being in and thinking about the city.

Exhibition designer, Christian Kliegel, wanted people to think of the city and the gallery differently so he made some changes to the space itself. “Moving the walls was a way to change the way people move around the gallery and make the space more exciting,” Kliegel said, “It makes you look at the whole space differently… and the kids get pretty excited about it.”

Kliegel worked with exhibit curators Bruce Grenville and Kathleen Ritter to bring together cross-disciplinary practitioners who are interested in the city. “The kind of people who use the city as a way to produce work by thinking critically about what they are working on,” said Kliegel.

These practitioners produced a cocktail of spatial, visual, and auditory experiences. “I could tell you more” Kliegel said, “But the best thing is to just go and experience it for yourself.” 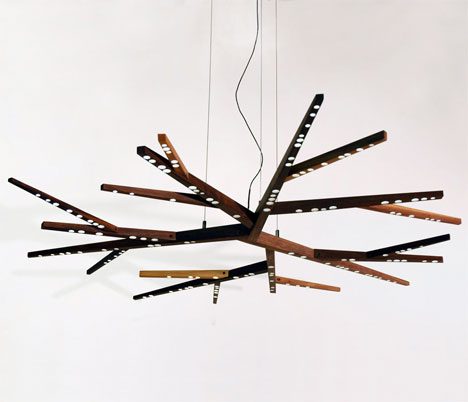 WE: Use, Mycologic Chandelier by Propellor Design

Take a peek at more of the contributors and their work  here.

WE: Vancouver is on now until May 1.